We always aim to put out a high-quality book for our readers to enjoy, and part of that is good art for the cover.
We are currently looking for artists for our third and fourth issues.
For the 3rd issue, all the stories take place in the same fantasy world and revolve around enormous creatures called Cities. The working title for this issue is “Where Cities Tread”. Though we do want to advertise what the stories are about, we don't need a literal picture of the creatures. If this job interests you, please contact us and we'll be happy to share more information about it with you.
For the 4th issue, tentatively called “The Idea Shop”, we are looking for a more atmospheric, less specific piece. This issue will be the first one where we will be publishing work from writers outside of our group, so pieces evoking collaboration, entrepreneurship, or a weird marketplace could all fit. However, we're very open to other concepts, so please feel free to contact us with your proposal.
Here are some examples of our previous covers, though you need not feel that you have to “match” their style. 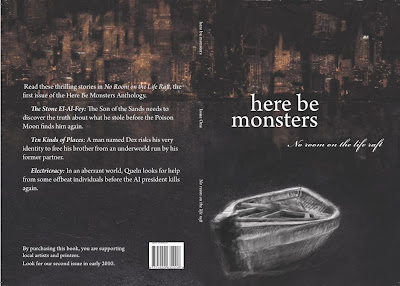 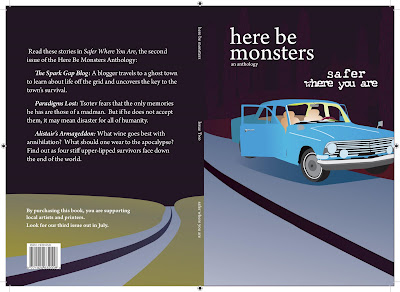 Both issues will be published simultaneously in November, so the cover piece must be submitted to us by October 17th at the latest. In addition to having your work on the cover, you will be credited on the website and in the book. You will receive one free copy of the issue and you may buy as many as you like for cost.
We look forward to seeing your work. Please send all questions and samples to herebemonsters.info@gmail.com. You can also find us on Facebook
Thank you,
The Here Be Monsters Staff
Posted by Alexander Newcombe at 12:00 PM 0 comments

First off, let me say we've been very pleased with the response to our first ever call for submissions.  We've gotten some great stories, and we're excited to work with new authors.  If you haven't submitted yet, this is a reminder that the deadline for getting your work into the 4th issue is September 15th.  There is still time, but not much!

To those that have submitted, thank you, you're awesome.  We'll be sending out notices of our decisions soon.  If anyone has any questions about the submission process, feel free to email us at herebemonsters.info@gmail.com

Thank you again to everyone who reads the blog and the books.

Chronicles of a Sedentary Foreign Correspondant

There are days when I feel like a foreign correspondent in my own city. Not because the people around me are strange, but because for about two years now, I've been writing in my second language, that is, in English.
Despite my very Scottish last name, I've been raised in a completely francophone household. My interest in English writing started with an Ontarian high school teacher who had us read Shakespeare, Cohen and William Blake, bringing us to the park to make us read poems at the top of our lungs in our accented English, looking and sounding quite ridiculous I'm sure. I loved it. I started reading in English. Not that it's unusual. Lots of French-speakers do it. Albeit, in my case, at least at the beginning, with a nagging feeling that I was somehow betraying my heritage (I almost said my country, but I don't want to open the eternal Canadian Pandora's box).
A friend recently pointed out that at Renaud-Bray, the big Montreal French bookstore, the English books are right next to the erotica, in a corner of the store. I laughed and said that it's probably so that both erotica and English readers could indulge in their guilty pleasure more discreetly.
Not that anybody has ever judged me for reading in English. If anything, it mostly attracts positive comments. It's more that I myself sometimes have this nagging feeling that I should make an effort to read more in French. And I do. But the thing is, I have this huge chip on my shoulder about French literature. It's a mostly irrational chip, but I find that a lot of French writers feel like they have to do more than tell a story. They have to delve deeper, to look for some humanistico-philosophical truth. The results are, to me, occasionally brilliant but mostly powerfully annoying.
It requires me to take reading seriously, and I don't want to. Reading is about fun, about thrills, laughter and imagination. These are powerful enough human truths for me. And depth does flow from a good story without need for all those discursive devices that make me feel like the author is trying to teach me instead of just being with me for the length of a book (not that English writers cannot be powerfully annoying too, but I feel like the culture in the Anglo-Saxon writing community is closer to the story). There are also some notably excellent ("Powerfully annoying", "notably excellent". Hm. I sound like a movie critic all of a sudden) exceptions in French literature, Alexandre Dumas Senior, Fred Vargas, Daniel Pennac and Tonino Benacquista being a few of those, but I'm talking about the dominant writing culture here.
Anyway, it felt only logical that the next step would be for me to write in English. Which I've now been doing for two years, and loving it, even though it's wreaking havoc on my abilities in both of Canada's official languages. That havoc and other states of identity confusion I will try to describe in a next post. In the meantime, be good, read and write good stories, and try to be more notably excellent than powerfully annoying.

That's the fun of writing

In the last few days, I've been chasing the spark. That is, the elusive little invisible thing that makes you start a story. Yes, it's true that inspiration isn't everything, that sweat and hard work and all that protestant work ethic thing is indispensable to good writing, but in the end, I'd never do it if not for the thrill of that spark. It's my drug of choice, and it's hard to come by, because nobody knows exactly where to find it. It's buried somewhere at a crossroads of ideas, under a signpost that shows the direction to somewhere you'll never get to. You have to bump into it while walking with your eyes fixed on a different horizon; then you'll shake your head, blink, and you'll see it. For an instant, you'll think it's obvious, how could you have missed it, it burns your brain with its intoxicating light. And then, you'll spend days and month writing, trying to get it back. That's what keeps me doing it. That's the real fun of writing.
Posted by Vincent Mackay at 10:09 PM 0 comments