Pictures of the Here Be Monsters Authors

Alana took some photos of the authors today on the Plateau.  What may seem like serious authorial insight on our faces is actually just the cold.  Check them out here. 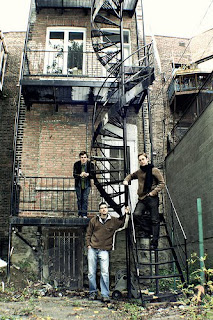 What is Here Be Monsters?

Some of you may be wondering what Here Be Monsters is. It is an anthology of short stories by Vincent Mackay, Alex Newcombe, and Duane Burry. The stories themselves were created because the three of us wanted to write for fun. We met every week or so and wrote story ideas, bits of dialogue, and characters on scraps of paper. Each of us would reach into the pile, pick one up, and write a part of a story using what we were given. We eventually decided that completed stories would be more fun than snippets done in a single evening and that was the impetus for Here Be Monsters.

This first issue is called “No Room on the Life Raft”. It has one story from each author in it. The stories are independent, but they all follow characters diving into the weird and fantastic. We have posted a preview for “The Stone of El-Al-Fey” already; the previews of the other two stories will be coming soon. We hope these give you a sense of the style and setting for each piece.

We’re busy assembling the book and preparing to distribute it. We are doing everything except for the printing, which is being done locally at Répro-UQAM. Once it is printed and distributed, we’ll let everyone know where it can be bought. If you live outside of Montréal and want a copy, contact one of us and we will get it to you. The price of the book isn’t set yet, but we are aiming to have it lower than $8.00. This money offsets the cost of the production; we’re not looking to quit our day jobs for this yet.

We already have grand plans for the next issue, which will be out early next year. If you have any questions, comments, or suggestions, feel free to post them here or contact us through e-mail.

Thanks for your support!

Here is an excerpt from Vincent Mackay's tale of adventure and revelation set in a mythical desert oasis. This is the first of three tantalizing previews that will be posted here, so keep watching for more exciting fiction. Without further delay, Here Be Monsters presents, The Stone of El-Al-Fey:

It was like walking out of your thoughts. From whichever direction you arrived, you came in from the emptiness of the desert and into a dizzying bustle of tents, carpets, muezzins, silver tea kettles on goat-dropping fires and camels drinking at the precious well. The colours were subdued, but after the long walk in the never-ending sands of El-Sharakh, they felt like fireworks. The smells of cumin, tea and dirt assailed you, and the noise broke into your mind like a burglar. I didn’t like to return to Al-Arakh, a place I avoided at all costs, but circumstances, and Zishkir, left me little choice. It reminded me of Omar’s words; I had less than two days left to find my buyer for the stone of El-Al-Fey. More than I needed; I knew my job.

I brought my camel to the lake of the well and let him drink for a long time, happy to just sit on a stone and watch the comings and goings of the oasis. To the left, three men were gathered in front of an orange tent, haggling over the price of some sheep. I tried not to think about the building that had stood in the same place as that tent, and about what had happened there fifteen years earlier. My throat tightened a little, and I bit my lip to force the thoughts back into oblivion where they belonged.

To the right, under some high trees, an obese man was reclining in the shade, a slave was serving him tea and another was fanning him with a palm leaf. He seemed to be counting gold, the coins lined up in front of him like a set of building blocks. I wondered at the man’s audacity, showing off wealth like that. He must have thought himself very powerful indeed if he believed he could tempt robbers in Al-Arakh.

“You should not watch the Sheik of Shez this closely, friend,” said a deep voice behind me, “Unless you wish to bring trouble onto your head.”

I turned, a hand on my knife, and found myself facing an astounding mass of muscle on top of which sat a bald head decorated with astute eyes and a pair of iron-rimmed glasses; a rarity around here. I was forced to back away a few paces so I did not have to crane my neck to look at him.

“And who would you be, friend, to give advice so freely?”

The man let out a big hearty laugh that managed to remain threatening. “I am Syl, and I used to kill men for him.”
Posted by Alexander Newcombe at 12:33 PM 0 comments

A little introduction to the Here Be Monsters process

It was a dark and stormy night.  In the dank basement, the harried writers huddled around a frugal meal of chips and pizza dough.  Ginger ale flowed to still their restless souls.  Somewhere, ghosts of dead pulp authors lay watching, silently biding their time.  A sweaty hand dipped into the cracked bowl and drew the first prompt.  The writer read it with a troubled heart, "Write a story involving an anthropomorphic muffin."  A scream rent the night.  It had begun.